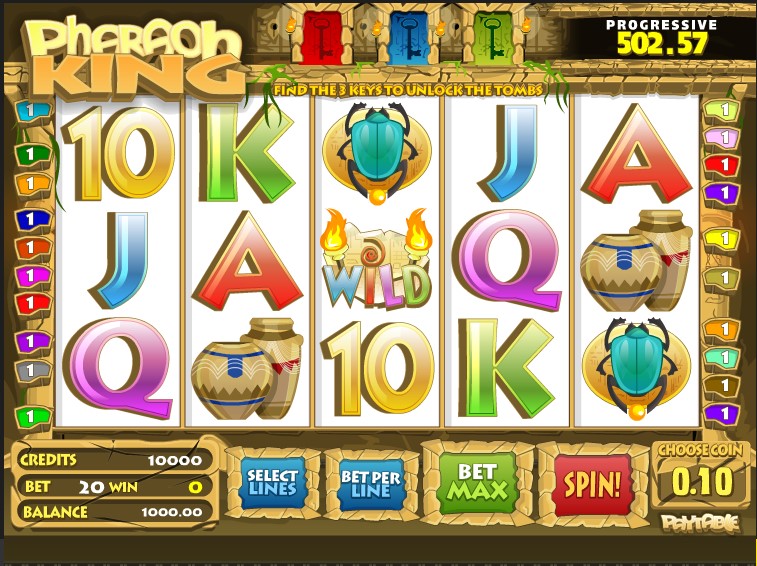 Pharaoh King is a 5-reel pokie with its theme centering around Ancient Egypt. The pokie has 20 paylines, a wild symbol and special key symbols that unlock an archaeology-related bonus feature which provides decent wins. The game is simple in design and features but it proudly presents a local progressive jackpot that grows with every real money bet placed in Pharaoh King. Get ready to have a trip through the mist of times, to the era of mighty pharaohs, pyramids and mysterious mummies. You do not need a big bankroll to get started because the minimum acceptable amount is no more than 20 cents.

Pharaoh King is an Egyptian-themed pokie that contains the most stereotypical motifs that many other pokies have, for example, depiction of pyramids or scarabs. But this lack of uniqueness does not make Pharaoh King a dull and boring game. The matter is that it has an interesting bonus feature where you can grab an excellent prize. In terms of visual design considerations, the game is drawn with an old-styled 2D approach, little animation and lack of sophisticated detail. It provides solid gameplay that so many gamblers got used to.

The reel set, which comprises 5 columns and 3 rows, is surrounded by a stone frame, with burning torches and Feature Key indicators above. The user interface elements below the reels also have some Egyptian decorative elements that add a thematic touch to the pokie and makes you feel as if you are conducting archeological excavations at an ancient site where rulers of Egypt lived three thousand years ago.

Icons in the pokie consist of the following: tens ($250 at the maximum stake), jacks ($375), queens ($500), kings ($1000), aces ($1500) and ancient urns ($2500). A combination awards coins in accordance with the paytable if at least three matching symbols (two in case of urns) appear on the screen, beginning with the utmost left reel. The payouts are moderate-sized by today’s standards but they are generated often, making your coin balance fluctuate up and down on almost every round.

There are three bet options that you can use to change a bet size. The number of lines is adjusted between 1 to 20, though players should activate all of them to maximize the winning odds. The other two options are a coin value ($0.01 to $1) and the amount of coins (1 to 5). All told, a total bet ranges between $0.20 and $100 per spin.

The pokie has three feature symbols, two of which are a wild and a scatter. The wild symbol represents a piece of stone with two burning torches stuck into it. The wild creates no payable combos by itself – all it does is substitute for regular symbols and help them complete combinations.

A cluster of pyramids located next to each other is a scatter symbol. It is not designed to trigger any bonus features. It is a normal symbol but for one exception: It pays out in any position should a certain number of them appear in view. Two scatters award up to $200, three of them grant $500, four pay out $4000 and five pyramids scattered across the reels award the pokie’s first jackpot of $10,000 if you play at max.

The feature starts on collecting three keys, which are shown on dedicated indicators above the reels. Keys land at times and they do not pay out any awards. But each key adds to the counter and once three of them are harvested, the feature starts. You will see six ancient urns and the objective of the feature is to click on any of them. An urn can reveal a cash award or a cash award plus the word “Collect”, at which point the feature ends, all winnings collected so far are added and you return to base game.

A progressive jackpot has a variable nature because it changes its value whenever the player introduces changes to a coin value. In view of this, the current jackpot indicator displays the lowest amount when playing at a one-cent coin and the highest amount when you select a one-dollar coin.

The jackpot is awarded when five Scarabs land on an active payline. There is an important requirement that must be fulfilled for the player to be awarded the jackpot; this is the maximum coin bet. This means that a player who wants to qualify has to wager 5 cents per line or greater. This further means that the minimum bet per spin is $1. Unfortunately, no statistics are available on the average jackpot win or average time in between hits.

If less than 5 Scarabs appear, they will behave like normal symbols because two, three or four of them on an activated payline award 25, 250 and 2500 coins respectively ($2500 at the max stake).

Pharaoh King is an Egyptian-themed pokie equipped with 5 reels, 20 paylines and a local progressive jackpot. The game features a non-payable wild, a scatter symbol and a second-screen bonus feature. The highest non-progressive cash prize is $2500, while bet sizes vary between $0.20 and $100 per spin. Aussies may play the pokie for real money on PC or mobile device.