Paco and The Popping Peppers Pokie

Play Paco and The Popping Peppers Pokie for free 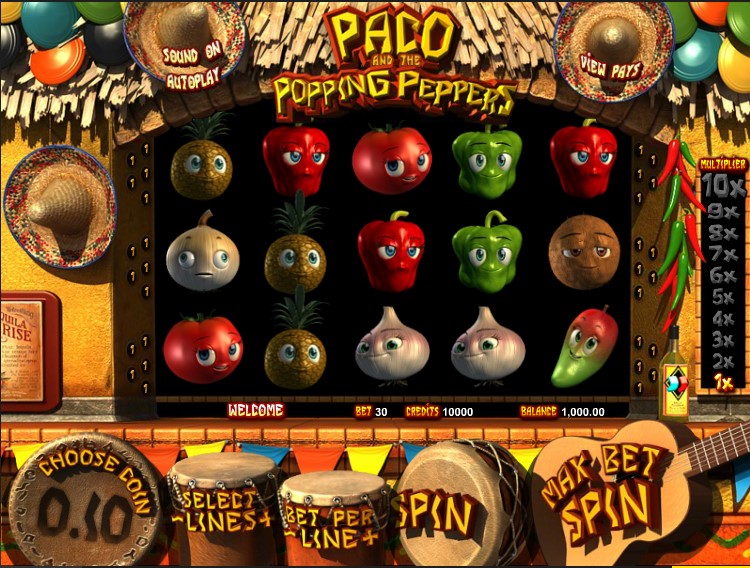 Mexican charm and culinary predilection of local people are in the focus of this 5-reel pokie released by Betsoft, a worldwide popular developer of online casino games. Playing the pokie, you will plunge into the exotic atmosphere of Mexico, get acquainted with Paco and get to know that people out there like extremely spicy food. The game has a cumulative multiplier that increases by x1 with every win until reaching a hefty x10, thus giving you the chance to win up to $2500. Another zest of the pokie is a sizzling hot bonus round where you are to predict card values and win big, if lucky.

Paco is a cheerful Mexican guy standing to the left of the reel set, playing the guitar, singing local tunes and touching his long moustaches. The reels are filled with spices and fruits that are widely used in Mexican cuisine. In general, the game is designed like many other solutions from Betsoft: a short intro video introduces the backstory, the reels are surrounded by thematic graphics, and the symbols themselves are absolutely thematic. In terms of reel configuration, Betsoft applies the tried-and-tested 5×3 format with 30 active paylines.

The user interface with bet selectors is designed as musical instruments that get animated when clicked. There are 3 options that you can change to adjust a bet size to your needs and bankroll:

Betsoft was not the inventor of win multipliers but Betsoft’s wide usage of this model became extremely popular with Aussies because it makes the gameplay unpredictable in a good way. With increasing win multipliers, the player never knows how much he will ultimately earn when the wave of falling symbols stops. How this model works?

You place a bet, click the Spin button and the 15 symbols disappear from the screen. Then, in a few moments, the new set of 15 symbols fall from above the top edge of the screen. Pay attention at the win multiplier ladder to the right of the reels. It shows values from x1 to x10. If a winning combination is formed, the contributing symbols explode and new symbols fill the empty positions, at which point the win multiplier increases by 1. If there is a new winning combo, you get a relevant payout multiplied by the current win multiplier, and the new wave of symbols takes place at a multiplier grown by 1 again. The process continues until no more wins are generated after a subsequent cascade of symbols.

A colorful patchwork piñata is a wild symbol and the biggest payer in the pokie. It performs two important functions: First, it substitutes for all symbols, helping them complete combinations. And second, piñatas are able to complete winning combos by themselves. But there is a limit to wilds: Only five piñatas count toward a combination, in which case you get paid $2500 at max. If a win multiplier of x10 applies to five wild symbols, you are in with the chance of earning a healthy $25,000.

Now it’s time to relax and have fiesta in the midday sun. You are taken to a beach accompanied by Paco, a tomato and a garlic. Near the ocean, you see a wooden structure with a big playing card. Based on what you see, you should predict whether the next card will be lower or higher. If, for example, you see 2 of spades, there is a 100% chance the next card will be of a higher face value, so you click on “Higher”. On making three mistakes, your lives are over and you are out. No details are provided in the game on how much the bonus can pay but on making hundreds of test spins, it became clear that you may win a few hundreds of dollars by the end of the feature.

Bottom line on Paco And the Popping Peppers

This is a Mexican-themed video pokie with 5 reels, 3 rows and 30 paylines. Its key feature is an increasing win multiplier that grows from x1 to x10 in base game. The pokie also has a wild piñata symbol that awards $2500 for five. Finally, you can enter a bonus feature where you are asked to forecast if a new card is lower or higher than the last card.