Out of this world Pokie

Play Out of this world Pokie for free 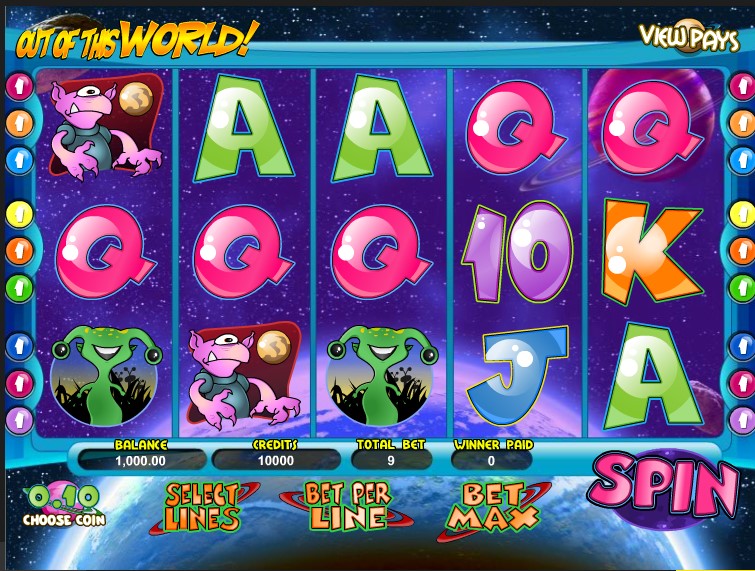 Out of this world Pokie Review

Out Of This World is a 5-reel 9-payline pokie, which is developed by Betsoft and is themed around aliens. Unlike many other pokies from that vendor, Out Of This World has a somewhat dated visual design with no three-dimensional effects that Betsoft are so proud of. The pokie will appeal to Aussies who like extraterrestrial themes and science fiction, while the game simplicity will be evaluated by first-timers. There is a single bonus feature where you are to shoot down alien saucers and win cash prizes.

Disputes are still ongoing between those who deny the possibility of extraterrestrial life and those who believe that life exists far across the Universe. Whether this is true or not, Betsoft guys seem to believe in beings from other galaxies and flying saucers, otherwise they would not have released this wonderful pokie that takes you to the orbit of an unknown planet. The 5 transparent reels are placed against the blue and green planet, home of creatures from outer space. The visuals are drawn in a cheerful, cartoonish way as if they are made for some animated cartoon for children. A cute green alien with two wiggle eyes pops up near the Spin button and adds fun.

Experienced players are certainly aware of the Win Both Ways model, which actually doubles your chances of hitting a combination. In the vast majority of pokies, matching symbols need to be positioned from left to right, and this is the main rule for getting a payout. In pokies like Out Of This World, winnings are evaluated in both directions, from left to right AND right to left. This means that getting 2 (or 3) identical pictures on reel 5 leftwards will grant you some money in accordance with the paytable.

Gamblers will not be surprised with bet options if they have ever played Betsoft’s creations. As a general rule, Betsoft focuses on an average user, not high-rollers, that is why virtually every game from that provider is excellent for the real-money budget of most players. In the reviewed game, there are three options that can be changed to tweak a bet size to one’s needs. The first option is the number of lines (1 to 9). The second option is a coin value that is available between a cent and a dollar. And the third adjustable setting is the number of coins per line (1 to 5). Given that, the minimum and maximum stakes are $0.09 and $45 per spin.

The game can be grouped under medium-variance pokies with comparatively frequent wins. The most characteristic thing about the game is big jackpot prizes (see above), with the top award being x444 times as high as the maximum bet. This is an unusual phenomena for a pokie because top prizes are normally way smaller.

The pokie is poor in bonus features. It has no wilds and no scatters. The feature mentioned in the title is the only bonus available here. To get it started, you need to collect three UFO symbols in any position. Only one UFO may appear on the screen, and each adds to the count above the reels. Once three are collected, the bonus begins. You will find yourself hundreds of miles above the alien planet with six alien saucers right in front of you.

When you click on any saucer, a beam of light hits the selected alien and reveals either a green or purple extraterrestrial. A green alien will give you a cash prize, while the purple one will end the feature. There is no information in the pokie’s paytable on how much the bonus awards. Hundreds of test spins have shown that the bonus prizes are awarded at random. Since they are counted in credits, the higher the credit value you have set for the game, the higher your real money award in dollar equivalent.

Bottom line on Out Of This World

Out Of This World is a 5-reel 9-payline slot that has a space alien theme and uses the Win Both Ways format. Unlike the bulk of Betsoft’s titles, this one is simple in graphics and has only one feature on offer. This feature is triggered by accumulating three special symbols and is played on the second screen. The top three prizes in the pokie are $20k, $10k and $5k.