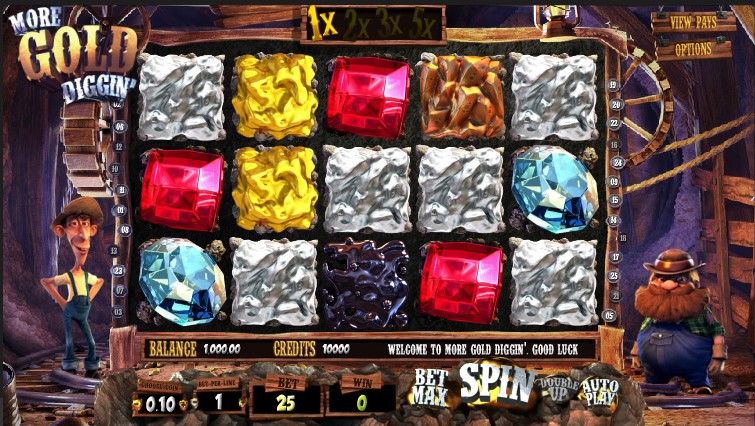 More Gold Diggin is a 5-reel 25-payline video pokie that is released by Betsoft and features the Exploding Symbols mechanics. Players are given the chance to increase a win multiplier up to x5 in base game and up to x15 during free spins. This is a visually rich pokie with stunning animations and Betsoft’s staple graphics that will keep you on the edge of your chair in anticipation of some decent wins. The maximum jackpot prize in the game is $12,500 with possibilities to grab more during numerous free spins.

More Gold Diggin is a sequence of Gold Diggers, a fabulous 5-reel pokie about a team of brave prospectors who mine gold in California during the Gold Rush era. The new pokie reviewed here features the same gold digging motif and the same characters so if you have played the first edition of the lineup, you will certainly like this recent pokie.

The action unfolds deep underground. A skinny prospector and his teammate, a dwarf-like red-bearded man, stand near the 5×3 reel set and encourage you to place a bet and spin the reels. They react vividly to what is going on around them; they clap hands and leap with joy when you have a win, or do other funny actions. You will sometimes see a gopher peeping on you from the bottom of the screen. Overall, the animations and every bit of the visual aspect of the game are as stunning as you might expect.

In this pokie, Betsoft applied an unusual way of how a paid round progresses on clicking Spin. Instead of spinning, the symbols fall beyond the bottom edge of the reel set and new symbols then fall from above the upper edge of the screen.

Most symbols have a distinctive, textured square shape and include a cluster of green gems (up to $250 at max), a red gemstone ($375), some orange metal ($500), oil ($1000), liquid silver ($2500), liquid gold ($5000) and a diamond ($12,500). All normal symbols create combos from left to right when landing on adjacent reels, starting at reel 1. Thanks to the cascading symbols to be explained in detail below, you may scoop much higher rewards and leave the pokie victorious.

Bet sizes and options that affect it are fairly typical for the games released by Betsoft. You have two customizable options to change such as a coin denomination ($0.01 to $1) and the number of coins per line (1 to 5). The paylines are always fixed at 25, so the minimum and maximum stakes are $0.25 and $125 per spin. As in other games by that vendor, you may click Bet Max to wager the maximum acceptable bet at your selected coin denomination. You can also set the Autospin feature and enjoy playing the pokie without having to click Spin all the way.

A dynamite stick is a wild symbol that substitutes for all normal pictures in the game. On the negative side, it fails to complete combinations by itself but it is really very helpful because it happens often and helps you receive cash prizes when substituting.

At the top part of the game screen, there is a win multiplier that shows a x1 value by default. When a winning combination is created, the symbols involved will explode and disappear, letting the symbols above occupy the vacant positions. If a new winning combo is hit as a result of the symbols fall, you get paid a related award and the process keeps on running. With each explosion, the win multiplier increases successively to x2, x3 and x5. This enticing feature may lead to big wins, especially when high-valued symbols line up in a proper pattern.

Watch out for TNT barrels on the reels as three of them will give you 10 free spins, which are played against a new background picture. Free spins are a favorite play mode of many online casino gamblers but here they have an extra profitable element. Base game win multipliers go from x1 to x5, while in free spins they start at x3 and grow in succession to x6, x9 and x15. Given that, the most valuable combo of 5 diamonds would bring you $187,500 during free spins, if you are lucky enough.

Every time you have a winning combo, the affected symbols explode and new symbols fall down – this is just the same Explosion feature that you see in base game. Moreover, additional free spins can be earned during a free spin mode if three TNT barrels land in any position again.

The Double Up gamble feature activates after a winning round. On a new screen, you will see a blonde who deals a face-up card to herself and four face-down cards to you. Your task is to pick any card which would be higher than the dealer’s. If you succeed, the gambled amount will be multiplied by x2. Note that a Double Up feature may last up to five rounds.

More Gold Diggin is a 5-reel 25-line video slot that takes you to the gold fields of California where you can strike it rich. The game has cascading symbols with cumulative multipliers that reach x15 during free spins. The highest possible cash prize available in the pokie amounts up to $12,500. Bet sizes will appeal to many Aussies, including high-rollers.