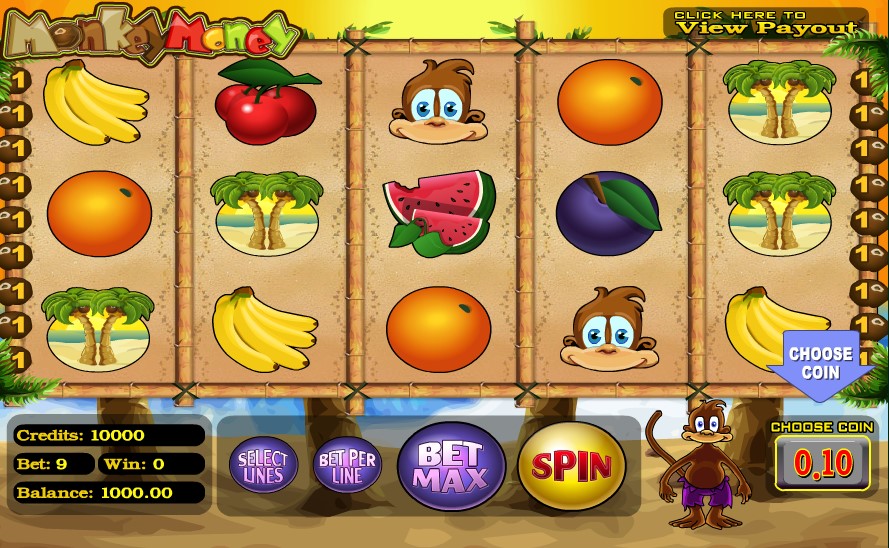 Meet Monkey Money, a nice and endearing video pokie with no bells and whistles. You get a straightforward action in tropical jungle in which a whimsical chimpanzee collects coconuts to trigger a bonus feature. Monkey Money is a non-progressive game, yet it offers some impressive payouts such as $25,000 and $15,000. The game is an appealing choice for all Aussies who like games with sheer simple nature. Besides, the game caters for first-timers who want to grab the basics of pokies.

The pokie has 5 reels, 3 rows and 9 paylines. The developer sets the reels against a couple of palm trees growing on a sandy beach. The reels are separated from each other with bamboo sticks, adding to the jungle theme. Betsoft uses a traditional mathematical model for this pokie, meaning that all winning combos award left to right on an active payline. An important thing is that a payable combo should begin with reel 1 and run without gaps – just the same as many other five-reel pokies.

Note that the pokie falls under the category of high-variance games. Just like most high-volatile games, Monkey Money has rare payouts but they tend to be very big. The pokie has a great potential in base rounds but you have to wait for dozens of spins until something worthwhile comes up. Do not even think of decreasing the amount of active lines because you can otherwise lose a high-valued combination. If you have tight budget, you would rather lower down a coin denomination and wager one cent per line.

The pokie gives you a choice to set the number of active lines: 1, 3, 5, 7 or 9. Each line accepts 1 to 5 coins and each coin comes in denominations between $0.01 and $1. That said, a total bet can be anywhere between $0.09 and $45 per spin. This is definitely a small bet size for high rollers but casual players and novices will be happy to spend just $0.09 and spin the reels. Alternatively, you can click the Bet Max button to set 5 coins of your selected value and see the reels spun at once.

There is only one single bonus feature in this simple pokie. Fortunately, you will not have to wait long until it is triggered. Experience has shown that it occurs fairly often. You will see a coconut symbol that appears from time to time on the reels. It then falls down into the hands of the chimpanzee who is standing under the reels. To activate a second-screen bonus, you need to collect three coconuts during a game session but note that you should stick to the original coin size and avoid changing it in the course of the game because this will reset the coconut counter to zero.

After the monkey has collected three coconuts, the bonus feature starts. You will be taken to a sea shore on which four coconut trees grow, each having two coconuts at the top. You should guide the monkey to the coconut you want to get picked. The monkey will climb the tree, pick the fruit and drop it to the ground to crack it open. All coconuts, except for one, reveal an instant cash prize but if the monkey picks a rotten fruit, the bonus amounts are tallied, you get the total bonus award and return to base game.

Monkey Money is a 5-reel 9-payline video pokie themed around tropical jungles and featuring a traditional set of fruit symbols. A short bonus game is the only feature available in the pokie but it is triggered fairly often. The top prizes in Monkey Money are $25k, $15k and $10k. You can open the game on your smartphone or tablet and enjoy it hassle-free.