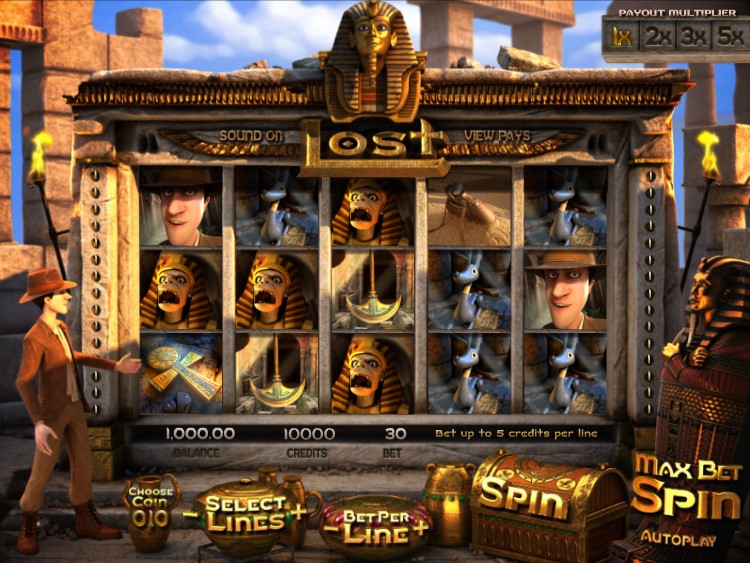 This 5-reel 30-payline pokie developed by Betsoft brings Aussies to Ancient Egypt. It’s gone, but for centuries this thriving civilization has been bringing forth mysteries and treasures. The Lost pokie is a key to recovering those! It is a stunning adventure in 3D and thrilling ambience and more, including base wins up to $2500, respins with multipliers that push payouts up to $12500, a Wild reel and 2 bonus rounds on top! It is a real portal to Ancient Egypt right in your favorite online casino. An Aussie playing Lost for real money is not going to be lost in any sense. Read the rules and tips below and find your way to Pharaoh’s treasure!

Dr. Dakota Bones and his loyal Farooq accompany you through underground arcades full of mummies and treasure chests. To get there, you should set up the value of coins between $0.01 and $1.00 by clicking the Choose Coin jar. From 1 to 30 paylines are selected with the Select Lines bowl. A golden tray named Bet per Line sets a bet level from 1 to 5 coins per line. Thus a total bet ranges from 1 to 150 coins, or $0.01 up to $150. The Spin chest makes the reels rotate with a heart-stopping sound of moving stones and the Max Bet Spin sepulcher does the same at the top stake, 150 coins on a total of 30 lines. The big Egyptian adventure starts in a second! – An Aussie should not worry about cryptic symbols. Care was taken to decode everything, read below.

There are 7 payable symbols and 3 bonus triggers. The payable icons are flasks, ankhs, Anubis statues, ancient axes, Farooq, mummies and Dr. Bones himself. They all pay from left to right when there are at least 3 of a kind on any active payline. The payouts range between x2 for three Flasks up to x500 for five Dr. Bone pictures ($2500 at the maximum bet). The paytable does not look too generous yet it is actually generous due to a Center Reel Respins feature and Center Wild Reel feature. Of course, there is a practical tip: engage all lines to boost your chances and trigger bonus features.

This is a great achievement of Egyptian priests. Each win in a base round activates a central reel re-spin, free of charge for a gambler, and with a x2 multiplier. The next win triggers the feature again, this time with a x3 multiplier, and then again and again until the multiplier reaches x5. And this is not the end of thrills: re-spins with a x5 multiplier will continue as long as a win happens.

This feature is well capable of earning thousands in a matter of seconds, you should try. You should think carefully about what the feature can bring you: every time a multiplier applies, the whole paytable jumps. A x2 multiplier pushes the wins to the range between 20 and 5000 coins or up to $5000 at the maximum bet of $5 per line. A x3 multiplier makes the range merrier, from 30 to 7500 coins. And the ultimate x5 multiplier does something comparable with great pyramids: it makes the wins stretch from $50 to astonishing $12500 at the maximum bet!

Features in the pokie are as inexhaustible as treasures in Ancient Egypt! Here is another one, also very much promising. Landing a Staff icon on any position on the center reel turns the entire central reel into Wild and recalculates the win. The wild reel substitutes for payable symbols only and all wins earned as a result of the Center Wild Reel feature are paid out at a x2 multiplier. Just like Center Reel Respins, the reviewed feature changes the paytable and makes it look good. Moreover, any win in the Center Wild Reel mode triggers a Center Reel Respin feature with x2-x5 multipliers (see above) and vice versa: a Center Wild Reel feature may be activated during Center Reel respins (in this case a multiplier of Center Reel respins applies).

A Monkey icon on any position on reel 4 triggers a Monkey Click Me feature. There appear 6 Click Me signs around the jumping monkey. One has to click the signs with the utmost speed one is capable of, it is a time-driven bonus round and a hesitating one is lost forever. There are instant cash prizes under each sign and here are 2 important tips. Firstly, prizes are paid in coins, that is, the actual amount of payout depends on a coin value, so set the value in view of this consideration. Secondly, the number of coins under each Click Me sign depends on a bet: the higher the bet, the more coins are found under the signs, actually, the prizes total into thousands if one goes at the maximum bet.

Landing anywhere on the reels, 4 Eye of Ra symbols trigger a blood-chilling second screen bonus round, a Mummy Tomb bonus. The task is simple, you should help Dr. Bones choose a correct door to escape. It seems that trying doors one by one is a jolly and well-paid business until… until the Mummy wakes up! Beware: a Pharaoh is dead for centuries but is still keeping an eye on his treasures and when angry he is as agile as if he were alive!

The 5-reel 30-payline pokie absolutely matches the Betsoft’s cutting-edge standards in terms of 3D animation, imagery, story, gameplay and features: it is grasping and entertaining. It is compatible with any device or gadget of your preference. In terms of gambling, it offers mind-blowing opportunities to win up to $2500 in base rounds and up to $12500 in bonus rounds. All in all, it is certainly recommended for Aussies as a great advance in terms of having good time and also as a fairly nice chance to win it big.