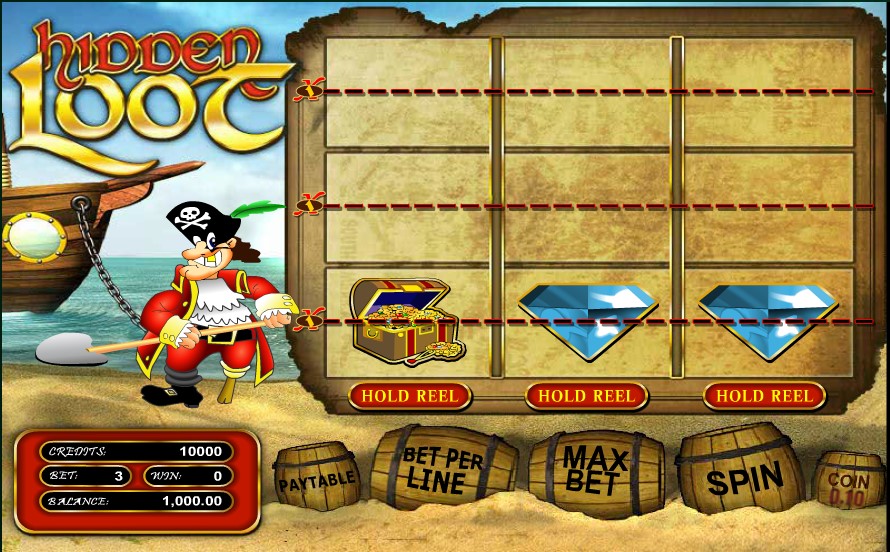 This is amazing what a vivid and exciting adventure an Aussie with tight budget may experience! Betsoft is indeed a gambling genius. It managed to blend some irresistible gameplay and a grasping bonus game into the reviewed 3-reel 3-payline video slot. The Hidden Loot pokie features a charismatic Captain Peg-Leg who brings you to the Treasure Island to have a stunning adventure. The one who is not thrilled with the prospects of winning up to $250 should look again at Captain Peg-Leg. His name is for a reason as well as a shovel in his hands is. What? A sailor with a shovel on a deserted island? Does it mean the loot is actually hidden somewhere nearby? Of course it is! Join Captain Peg-Leg on a PC or mobile and have fun!

Gameplay: a plain way to make it catching

One would think that the gameplay in a 3-reel 3-payline pokie does not promise much. It is true in many cases but not when it comes to Hidden Loot! The catch is plain but it works: only 3 symbols are shown on the bottom row while 6 more positions are empty. When a round starts, the reels rotate with a heart-touching mechanical sound, symbols appear one by one and excitement jumps with every symbol!

To start, you have to take care of controls and adjust the gameplay according to your habits and mood. All controls look like wooden barrels, and clicking them adjusts a bet size. The value of coins is set from $0.01 to 1.00 by clicking the Coin barrel. A Bet per Line barrel decides on 1 to 5 coins per line. There are 3 paylines, all horizontal, all constantly on. Thus, you may wager from $0.03 and up to $15 per spin. The reels are set in motion with the Spin or Max Bet barrel, the latter betting 15 coins at once. This is all you need to start the game.

Each of the three reels is equipped with the HOLD REEL button, a handy tool to control the gameplay. The Hold Reel feature is activated after every paid spin. You may choose to fix in place one or more symbols on the bottom row, which you think give you a realistic chance to create a combination. When the HOLD REEL is clicked under your chosen symbol, the symbol on the bottom row will instantly replicate itself onto other positions on that reel. After you put on hold one or more reels, the remainder will respin once, at which point new combos will be evaluated (if any) and paid out.

The symbols are all things pirate. The paytable with them is displayed under the Paytable barrel. It is a good solution to hide the table, since this gives more free space to Peg-Leg and his mysterious shovel, not to mention the reels themselves. Actually there are 6 payable symbols: yellow, blue and red Gems, Treasure Chests, Pirate Tall Ship and Skulls. These pay when there are 3 of a kind on a payline. Wins range from x1 for three yellow Gems and up to $250 for three Sculls at the maximum bet of $15.

There is also a Wild symbol, Captain Peg-Leg himself. He substitutes for all payable symbols, including a bonus trigger represented by a Hidden Loot logo. Tip: Put a wild symbol on hold any time it appears, to maximize chances for a win in a base round and to try to achieve a second screen bonus round.

Landing 3 Hidden Loot logos on a payline does not pay anything but triggers the second screen bonus round. Captain Peg-Leg digs a hole in the sand with his shovel and unearths entry into an underground system of tunnels. The second screen bonus round starts with a how-to for a gambler. It is made very much like a vintage 2D computer game: Captain Peg-Leg has to collect gemstones while running in tunnels and climbing the stairs just like in the Prince of Persia PC game. You move the captain with up, down, left and right arrows on the keypad. The trick is that the tunnels are not deserted: the undead, skeletons with terrible knives, are guarding the loot. When they stub the Captain, he loses all the collected loot and has to start from the beginning.

Beware of skeletons: they move fast and appear from nowhere. Actually, this is their weak point as well: when a skeleton appears somewhere, it may disappear at any time leaving a chance for Peg-Leg to collect gems. The task is to collect all gems before the bonus round is over. Once all yellow gems are collected, there are two more rounds ahead, with blue and red gems. There are more gemstones, skeletons, tunnels and stairs, so one has to act swiftly and always keep an eye on the countdown watch. Completing 1 or 2 levels out of 3 does not burn the loot: all the collected gems will be yours.

This game is simple yet it holds a gambler brisk and sappy, filling him with adrenaline. It is genuinely exciting! Despite a striking similarity with retro PC games for kids, it is meant for adults because it can be played for real money. Every collected bonus gem awards according to the paytable. Again, beware of skeletons!

This 3-reel 3-payline pokie deserves appreciation and respect. Betsoft managed to build a lot into a very simple video slot with unsophisticated graphics and almost nonexistent animation: the grasping gameplay, a chance to win up to $250 at a $15 wager, a Wild symbol and an exciting and profitable bonus round. The pokie is as charismatic as the main character, Captain Peg-Leg himself, and sure it does its best to provide you with the funniest online casino experience ever.