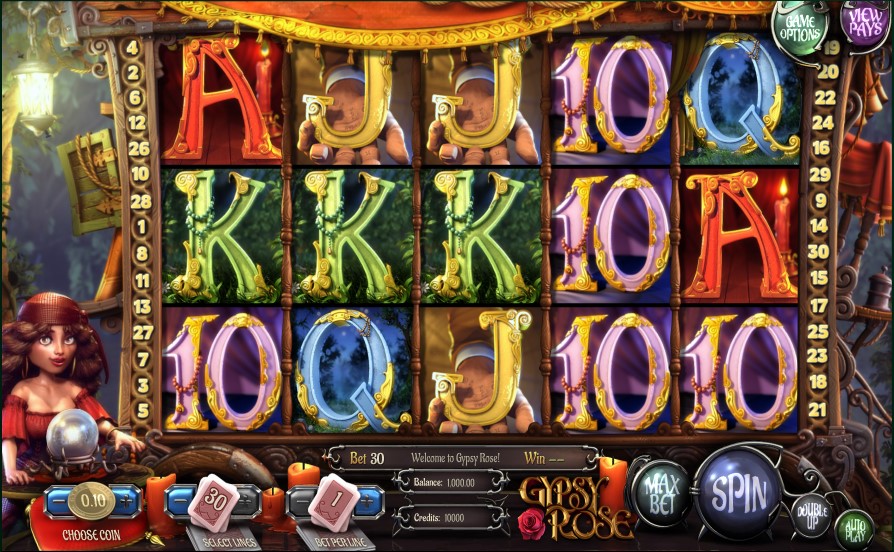 Gypsy Rose is a 5-reel video slot inspired by fortune telling. The impeccable graphics will make you keep playing for hours, while numerous features will see you jumping in anticipation of big wins. A size of regular payouts is not the major asset of the pokie because the top-valued Love Potion icon awards just $1500 at a $150 bet. What Australian gamblers would like most in the pokie is a multitude of features that activate often. Here you will see randomly distributed wilds, a Magic Book instant wins, free spins, a captivating bonus game with tarot cards and a lot more.

Gypsy Rose has Betsoft’s branded graphical style and intensive animation effects. The entire screen and all of its game-related and auxiliary elements stick to the theme. The background image with bats or large insects flying around a lit lantern, and the user interface form a single whole. Even just watching at the pokie main screen where the reels, is a great aesthetic pleasure. Layout of the reels is standard because Betsoft have utilized a 5×3 model with 30 non-permanent paylines.

Many gamblers believe that using playing card values instead of thematic symbols is to acknowledge the lack of creativity. Indeed, even some top-notch developers (let’s not make it personal) tend to overuse tens, jacks, queens and other card pics, for some unknown reason. On Gypsy Rose reels, you will see a carousel of 10, J, Q, K and A, but their presence is appropriate because there are a few card motifs around the reels, for example, near bet control buttons and at the gypsy who is shown sitting at a small round table and manipulating her magic orb. These playing card icons award up to $450. Other symbols include a black crow ($750 for five of a kind), a spellbook ($900), Gypsy Rose herself ($1200) and a love potion ($1500).

The wild symbol is represented by a playing card with the word Wild on the back. It only lands on the first and fifth reels. Wild symbols are used to substitute for other pictures and help them complete winning combos. When two wilds appear on the same row on reels 1 and 5, Rose will throw a few wild cards onto the reels, transforming some high-valued pictures into wild. As a result, you will have four or more wild symbols on the screen simultaneously. In addition to that, wilds are able to create combos on their own and hitting five of them on an active line awards you the slot’s highest prize of $5000 at max.

A magic ball used by Rose to tell you fortune is a feature symbol that lands only on the central reel. When it occurs on reel 3 and two high-valued matching symbols land adjacently to it on reels 2 and 4, a corresponding feature will be activated. There are four high-valued symbols including a love potion, Rose, a spellbook and a crow, meaning four unique features can be activated:

After a winning base round, you may choose to gamble your winnings in a simple Heads or Tails game. Choosing the correct outcome of a coin toss will increase your original sum by x2, while failure to guess it correctly will forfeit your winnings.

Gypsy Rose is a 5-reel 30-payline pokie that is released by Betsoft and is themed around fortune telling. The maximum jackpot prize in the slot reaches $5000, but its bonus features such as free spins, respins, instant bonus wins and second-screen games, open up more prospects for winning. Bet sizes are set from $0.30 to $150 per spin. The game is perfectly compatible with major mobile devices.