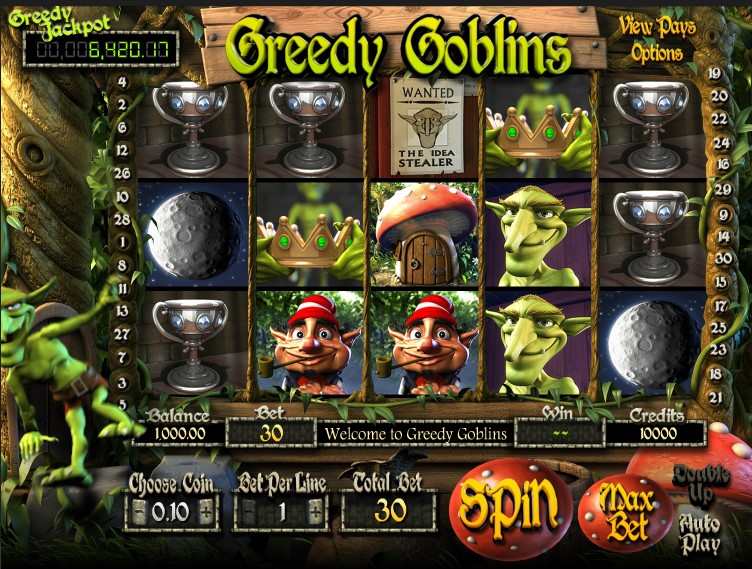 This 5-reel pokie welcomes you to Elfania, the land of the brilliant minds and home of hundreds of revolutionary inventions. The fairytale theme is augmented with hard-hitting graphics that Betsoft is so proud of. Features have not been ignored by Betsoft developers, who filled the pokie with numerous bonuses such as cascading reels, sticky wild reels and respins to name but a few. Ultimately, your gaming may culminate in a progressive jackpot hit and this is just the beginning of your journey to Elfania because there is more to come.

Most pokies from Betsoft have a back story, and gamblers love this because playing video slots with a sophisticated plot and vibrant characters is a way more interesting than doing the same in plain, dull pokies with utterly irrelevant symbols. Greedy Goblins takes you the fantasy kingdom populated by elves, dwarfs and other creatures. Goblins drive a wedge into the harmonic society because they steal ideas and innovations from industrious elves. Many times you will see green-skinned goblins sneaking into labs or storehouses at night to pinch some secret things that are guarded by elves.

In terms of reel layout, Betsoft uses here a standard 5×3 model with 30 fixed paylines. Winning combos count in a usual way, from left to right, for three matching symbols arranged on a payline. The symbol set includes only thematic symbols that complement the whole storyline; these include the Wanted poster portraying a goblin’s face ($375 at the maximum acceptable wager), a full moon ($375), a big diamond and coins ($750), a silver goblet ($750), a golden crown ($1200), a mushroom house ($1200), a sly goblin ($6000) and an elf.

The player has two options that can be changed in order to increase or decrease a total bet. First, there is a coin denomination ($0.01 to $1). Second, the pokie accepts 1 to 5 coins per line. Thus the player may bet as low as $0.30, as high as $150 and everywhere in-between.

A golden coin with an embossed elf’s face is a scatter. Whenever two or more coins land in any position, goblins will come running up to collect it. The vacated positions are then filled in by the symbols located above the taken coins. Note that the winning combinations are calculated before and after the coins are collected so you have twice as many chances to get an effective combination. Furthermore, two and more coins pay out up to $3750 when in absolutely any place on the reels.

A small wooden hut is another feature symbol. It does not pay out by itself but its presence on the reels means you are going to enjoy some tangible profits. When at least one wooden hut occurs, you are awarded a random number of 1, 2 or 3 respins and the reel the hut has landed on will become entirely wild and sticky. This means the wild reel will persist for the duration of respins. If a new hut appears during respins, it will morph that reel into wild but no more respins will be granted.

When a book of secrets falls on the second and fourth reels at a time, the same-name feature gets underway, You will see a small engineering lab with drawings and tools. Two goblins are standing inside and seek for something worth stealing. Your task is to help goblins rob the great ideas by selecting various areas at the lab. Clicking on each item reveals a random award. The feature ends when you find Collect.

A Welcome To Elfanis sign is another scatter symbol. It does not need to occupy a payline pattern for you to get an award. Instead, it counts in any position, and hitting three or more of them provides you with a massive award of $7500 at max. You are then awarded 10, 15 or 25 free spins, depending on how many scatters have triggered the feature. During free spins some pictures will bear a multiplier of x2 to x10, which applies to a winning combination completed with the help of these pictures.

Greedy Goblins has a local progressive jackpot. Its size changes dynamically as the player changes a bet size. A jackpot is awarded when five Elf symbols are visible on a payline. Another condition precedent is that the player should wager 5 coins per line, no matter a coin denomination. With that said, the minimum bet that unlocks a jackpot is $1.50 per spin. In case of failure to place the maximum bet, the jackpot combo of five elves releases a regular pay of x12,500 a line bet.

In the Double Up gamble feature you should choose a coin’s side correctly (Goblin or Elf). The elf standing in front of you will toss up the coin and determined the outcome of the gamble feature.

Greedy Goblins is a 5-reel video pokie with 30 paylines, a fairytale theme and the maximum non-progressive prize of $50,000. Features used in the pokie are free spins, sticky wilds with respins, a second-screen bonus game and a Coin Drops feature with cascading symbols. In addition, the pokie has a local progressive jackpot that tends to reach around $50k to $100k until won.