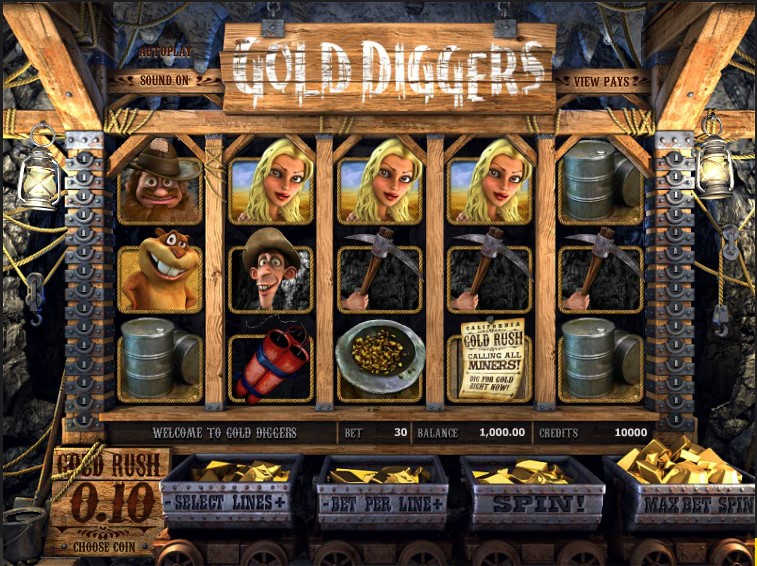 Gold Diggers is one of the first of Betsoft’s pokies to have been built on a 3D graphic engine. This is an immensely popular game and also one the most recognizable titles of the provider. By today’s standards, the 3D effects applied here look a bit dated as compared with latest slots from Betsoft. Nevertheless, it stills captures attention of thousands of Aussies because of its enticing bonus features, frequent payouts and an interesting theme. Features that you will come across in the pokie include falling symbols, a Gopher a Dig feature and a Gold Rush bonus game. The maximum win that a single combo can produce equals to $2500.

Following the discovery of gold in California in 1848, a year later the region was flooded by prospectors from across the globe. Adventurers came there in wagons and on horseback, on foot and on ships. Their intensive gold digging, panning and other forms of gold extraction reshaped California and gave rise to what later was called the Gilded Age of American history. The action of the reviewed pokie takes place at the end of the 19th century in California. Three hopeful prospectors, a sexy blonde, a fat guy and a skinny guy are digging gold and collect other resources found in the process.

The visual design of the game fits the gold mining theme. The reels are framed by massive wooden beams. Around the reels, there is a typical ambience of an underground mine, with ropes extending across the stone walls, kerosene lanterns suspended from the beams and other things that make you feel like dozens of feet below ground. From the point of view of reel configuration, Betsoft have utilized a standard 5×3 field with 30 adjustable paylines.

A combo pays out when two or more matching symbols are assembled on a payline from left to right. Betsoft manifests its creativity in minor decorative elements such as payline markers, which are made as thick rough ropes stretched through affected symbol positions. Interestingly, neither wild symbol nor free spins are present in Gold Diggers, but their absence is more than outweighed by the abundance of other features and intensive gameplay.

Bet buttons are designed masterfully as mine trolleys filled with gold bullions. The player has three options to control: the number of lines (1 to 30), a bet per line (1 to 5 coins) and a coin denomination ($0.01 to $1). By changing these values, one can place a bet from a cent (with a single line in play) to $150 (with all lines in play) per spin.

A bunch of dynamite sticks is a feature symbol. From the one hand, it acts like a normal symbol because it pays out in a regular way when 3+ appear on a payline. The max prize is $1000 for five dynamites. From the other hand, three or more of them trigger a feature. The dynamites will blow and disappear, causing the symbols above fall on the vacant spaces, offering you a new opportunity to create a combination. This is a kind of “cut version” of a popular Avalanche or Rolling Reels behavior applied by some of Betsoft’s competitors. You are going to like the Dynamite feature because it expands your chances to hit a valuable combo.

This is an on-reel feature in its most basic form, which is triggered by 3 to 5 funny gophers on any active payline. Before the feature itself starts, you get an instant prize of up to $150. Three or more Click Me symbols will appear on the reels and you are prompted to click on them one by one. The gopher will eat through each symbol to reveal a random cash prize, and you will have a total of four bonus rewards at the end of the feature. The maximum money win varies greatly and is determined at random but the rule of thumb is the higher your bet, the more you win.

This is a second-screen bonus and the pokie’s centerpiece, which is triggered by three scattered Gold Rush posters. Your task is to help the three diggers find the golden deposits hidden deep in the rocks. On the stone wall, you will see six spots marked with digits 1 to 6, each having golden nuggets behind. When you choose any spot, the diggers blow up the wall to extract the gold deposit. The entire bonus round has stunning animations and sound effects, say nothing of generous cash prizes.

Gold Diggers is a 5-reel 30-payline pokie from Bally. With funny, humorous characters, the pokie has a Gold Rush theme and three bonus features including a Dynamite bonus with falling symbols, a click-me feature and a generous second-screen bonus. The maximum prize in the slot is $2500, and a bet size is $0.30 to $150 per spin. Being a sought-after pokie, Gold Diggers is available in most online casinos out there.