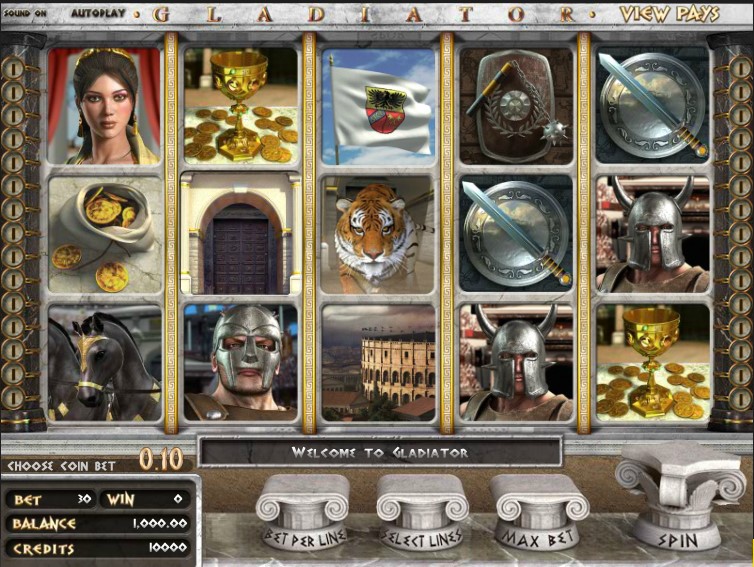 Gladiator is a 5-reel 30-payline video pokie released by Betsoft. Its title fully reflects the thematic focus of the game; and really, all the symbols, elements of the interface and graphics work in unison to create a story gladiators, brave Roman soldiers who shed blood on arenas fighting each other for the entertainment of the crowd. The pokie has Betsoft’s iconic faux-3D graphic and a whole pack of interesting features such as wild reels, Collect Money on-reel bonus and a gorgeous second-screen game that imitates a real gladiator fight. The highest prize in the pokie is $3750.

The pokie takes you from the coziness of your chair right into an amphitheater bowl where gladiators armed with swords, shields, tridents and other weaponry assert their right to live. Each symbol is encased in a marble frame, and bet controls are stylized as pieces of marble columns, which adds a thematic touch to the game. In terms of configuration, the pokie is a standard piece. It has 5 reels and 3 rows, and winning combinations are created from left to right along active paylines. Win animations are perfect and they can be likened to short videos in computer games.

There are three changeable options that affect a bet size. First, you can decrease the number of active lines down to 1 (though it is not reasonable to do so). Second, you can change a coin denomination in the range between $0.01 and $1. Third, you may choose to wager 1 to 5 coins per line. That said, the minimum and maximum bets in the pokie are $0.30 and $150 per spin. This provides flexible choices for every online casino user, especially for low-rollers.

A Coliseum is a scatter symbol meaning it counts in any position. The payouts granted by this symbols are the biggest in the pokie, with 3, 4 or 5 of them awarding up to 3750 coins ($3750 at max). The scatter is also a feature symbol since it takes part in a bonus feature described in detail below.

Actually, the pokie has no wild symbol that would appear in base game. But there are two bonus modes where a wild manifests itself in different scenarios. One of these wild features involves a Princess symbol. If the Princess appears on top of the second, third and fourth reels, it activates the titular feature. The beautiful princess will throw handfuls of rose petals onto the symbols below and every symbol that petals touch turn into wilds with a double multiplier. If any winning combinations are completed with the Wild x2 symbols being part of them, their normal paytable values are multiplied by x2.

Along with being a great payer, a gladiator also triggers a wild feature when on reel 3. Once it lands in any position on the central reel, the entire reel is covered with a marble slab. The gladiator runs up to the reel, hits it with his sword and breaks it down, revealing that the third reel has become entirely wild. After this metamorphosis, winning combos are evaluated, if any.

The feature is triggered by 3 massive doors landed on any payline. You will be asked to click on any door to reveal a cash prize. You continue picking the doors including these that you have previously picked, until the door of your choice reveals a coin value and the Collect word, at which point the feature ends and all bonus winnings are tallied for an ultimate award. This bonus event is triggered fairly often and the prizes are between low and moderate.

This is the most impressive and unpredictable part of the pokie, which can bring you lots of wins. To start the feature, a set of requirements must be met: you need to hit the Hero + Coliseum + Villain symbols in that exact order, the symbols must be on paylines 1, 2 or 3; and they must be on reels 2, 3 and 4. When all of these requirements are successfully met, a second-screen bonus feature gets underway.

You will see two gladiators ready to fight. You task is to choose the one who you believe will win. Every hit made by your chosen gladiator and every enemy attack blocked by him adds a certain number of points. Knocking out the rival brings more bonus points. If you win this feature again during normal gameplay, you will find different settings and outcomes, so each bonus battle is totally unique and extremely profitable.

Gladiator is a 5-reel 30-payline video slot themed around gladiator fights. Bet sizes vary from $0.30 to $150, and the maximum jackpot win is $3750. The pokie has four bonus features: a double wild multiplier, a wild reel, a Click Me feature and a second screen Gladiator Battle feature. Excellent graphics, nice animations and a discreet soundtrack that goes along the gameplay make it a good entertainment option for many pokie fans.