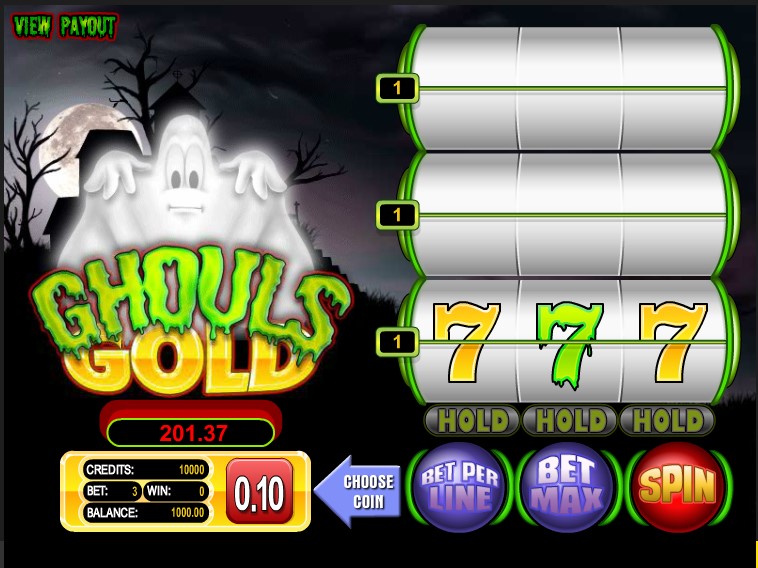 Ghouls Gold is a 3-reel 3-payline pokie released by Betsoft. The theme is clear from the title: The pokie takes you to a small deserted church in the countryside haunted by a ghoul. This game is unlike many others because it has a rare Hold feature and a unique reel design. You will see that only the bottom row of the reels is active at the beginning of a spin, and this approach will add diversity and fun to your online casino experience. Another feature that may also be a decisive factor in your choice is a progressive jackpot offered in Ghouls Gold. Though not that high, the progressive jackpot may be an incentive for you to play the pokie for real money.

The game has an unusual design. The three reels, located to the right-hand side of the screen, have three rows but before you click Spin, only the bottom row is filled with symbols, while the remaining two are empty.

Symbols in the pokie, except for sevens, reflect the ghost theme. They are drawn in simple lines and shapes, without that level of detail that made Betsoft wildly popular. The symbols and related payouts are Yellow Sevens (up to $5 at max), Green Sevens ($15), Candle ($25), Bats ($50), Boiling Cauldron ($100), Money Bag ($250) and Dark Building ($500). Each winning combo must contain only three matching symbols. Experience has shown that low-paying combos, these with sevens, are produced often, nearly on every spin.

The three paylines running horizontally along each row are always active and cannot be removed. There are two options that the player is allowed to adjust. This is a coin value ($0.01 to $1) and the number of coins per line (1 to 5). Consequently, the minimum and maximum bets on Ghouls Gold are $0.15 and $15 per spin, with all lines activated.

Coins is a wild symbol in its most basic form. It substitutes for any other picture, except for Jackpot, and helps them complete winning combos. This wild does not play first fiddle in the pokie because it cannot form combos by itself. However, it may be helpful sometimes, especially when appearing on the first and second reels simultaneously.

Fans of retro fruit machines might still remember Hold buttons under each reel. They work similarly in every game: The player selects which reel or reels to fix, while the remainder respin for a chance of better wins. This evokes a feel that you can control a pokie in order to chase the symbols you want.

In this game, Hold buttons have the same behavior as described. After setting a bet and clicking Spin, the bottom reel begins spinning and stops in a few seconds. Under each symbol, there will be a Hold button and you can choose which symbol(-s) to fix, if needed. As a general tip, you should click Hold for those symbols that have higher probability to create a three-of-a-kind combination after a subsequent respin.

You may choose to hold one, two or three symbols at a time. On clicking Hold, you will see that the same position on the central and top row will be filled by that symbol. For example, there is a Yellow Seven on the bottom row of reels 1 and 3. You decide to hold both, at which point the entire reels 1 and 3 will be occupied by Yellow Sevens. After you have fixed the needed symbols in place, reel 2 will respin, show symbols and provide an ultimate win (if any).

The second screen feature is activated on hitting three Bonus Round ghosts on any payline. If you see one or more of these pictures, you should not think twice about clicking Hold on the ghosts. The bonus feature is designed as a short video game that lasts about ten seconds or so. When it starts, you will see ghosts flying quickly across the screen. Your task is to click on the ghosts and earn points for each hit. This is a bit tricky and requires some dexterity because ghosts enter the screen from different points and float very fast from the bottom to the top. The bonus award depends on how many ghosts you have caught.

How to win the progressive jackpot?

The value of the progressive jackpot is on constant display to the left of the reels, and its size correlates to your bet value. When you alter a bet size, the jackpot changes too. Winning the progressive pool is not that hard – all you need is to hit three Jackpot pictures on any payline. This jackpot builds up locally and it normally represents a 4-digit value if you wager the maximum acceptable bet of $15. Note that a bet size is not a qualifying factor. You can wager $0.05 per spin and still be eligible for a jackpot, though very low.

Ghouls Gold is a 3×3 progressive slot with three permanently enabled paylines. “Hold” is the major feature that stands out. Other features include a wild symbol and the second-screen bonus round where you can control the gameplay and earn real money by catching ghosts. The game is available in many Australia-friendly online casinos and is supported by mobile devices. The maximum non-progressive prize up for grabs is $500.