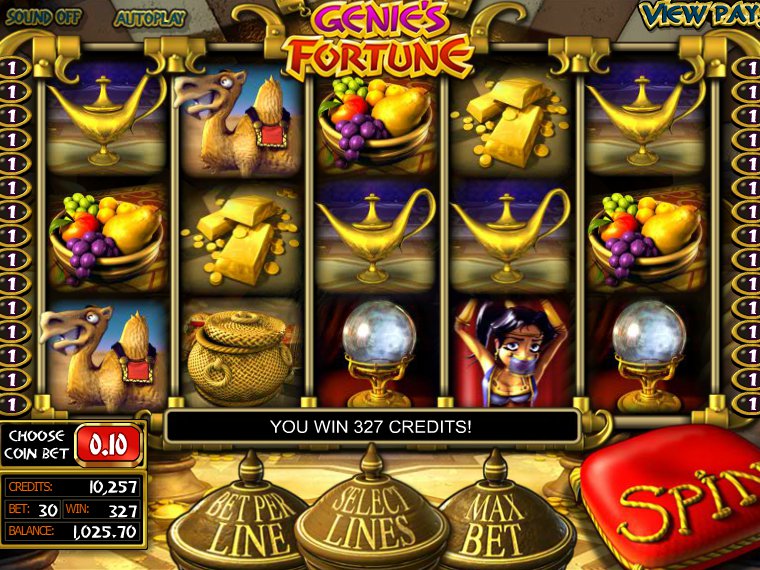 Genie’s Fortune is a magic-filled video pokie with 5 reels, 3 rows and 30 paylines. Inspired by a series of oriental fairy tales about Aladdin and the magic lamp, Betsoft released this beautiful pokie that will fulfill your wish of big money since the top prize offered here is an astounding $25,000. On the reels, you will come across lots of characters and things taken from animated cartoons about Aladdin. Besides, the pokie is packed with impressive bonus features including free spins, Click Me Crazy bonus game and Genie’s Wishes feature, all designed to make your money wishes come true.

The pokie has stunning animations and a set of themed symbols, all of which are devoted to Aladdin and his adventures as depicted in the Walt Disney’s animated film of the same name. Each smallest element in the pokie is drawn so masterfully that you feel like watching your favorite episodes of the film, while spinning the reels and earning coins. In terms of structure, Genie’s Fortune is a typical 5-reel game in which winning combinations are completed on active paylines from left to right.

The pokie is attractive for both low-rollers and heavy punters because of flexible bet options. The player may change the number of paylines from 1 to 30. By choosing a coin size from $0.01 to $1 and the number of coins per line (1 to 10), the player can place as low as $0.30 and as high as $300 per spin.

The pokie has a wild symbol, which is represented by a magic carpet. This is the highest paying picture in the game as five of them will award you 2500 coins, which translates into $25,000 at the maximum wager. The wild performs its typical function as a substitute for other icons. Besides, it takes part in a lucrative bonus feature when it stops on the first reel.

The pokie provides real money awards when a combination of symbols is completed from either side of the reel set. This means you are going to land more winning combos and thus get more winnings on each reel spin.

Along with being a wild, the magic carpet also triggers a bonus feature. See it landing on reel 1, and the feature starts. From its original position on the first reel, the carpet will fly to the right edge of the reels, squeezing all symbols on the way and turning them into bonus money. So you will have a total of four bonus payouts because there are 4 symbols between reel 1 and the right edge of the game field. This feature occurs often and make you feel happy in anticipation of bigger wins.

This conspicuous bonus feature is triggered when a funny monkey lands on the central position of the second reel. Once there, you are prompted to select any icon to the top, bottom or any side of the monkey. The monkey will then jump on the selected icon, begins shaking it and reveals an instant coin prize, the amount of which is determined by your current bet size.

Gamblers of today are used to having free spins in every 5-reel pokie that are found in online casinos. Genie’s Fortune is no exception. It does offer a great free spin feature after you have landed three (or greater) treasure chests in any position. Treasure chests are scatters so they do need to appear in any specific place to be counted towards a combination. The amount of free spins depends on the number of triggering scatters in base game. You obtain 5 free spins for three chests, 10 spins for four chests and 20 bonus spins for hitting five chests on the screen.

Now comes the pokie’s centerpiece where you will make you wishes come true. To get access to the feature, you need to land three Magic Lamp icons on an active winline. You will then be taken to the second screen that showcases the genie inside a treasure cave. The genie will give you three wishes to choose from: Wealth, Fame and Love. Clicking on any of the wishes, you release a random coin prize. On the second stage, the almighty genie asks you to select from three golden cups that stand for Travel, Wisdom and Long Life. Choose wisely because you have only one try to collect the highest prize hidden behind any of the three wishes.

This is a 5-reel 30-payline video slot, which is inspired by the Aladdin’s adventures and is based on the win-both-ways format. The game has a free spin round, the second-screen Genie’s Wishes feature and two on-reel features such as Click Me Crazy and Carpet bonus. Due to an extremely high maximum bet, the pokie will be suitable for those who tend to bet high. At the same time, the minimum bet of $0.30 makes it a good choice for low-rollers.