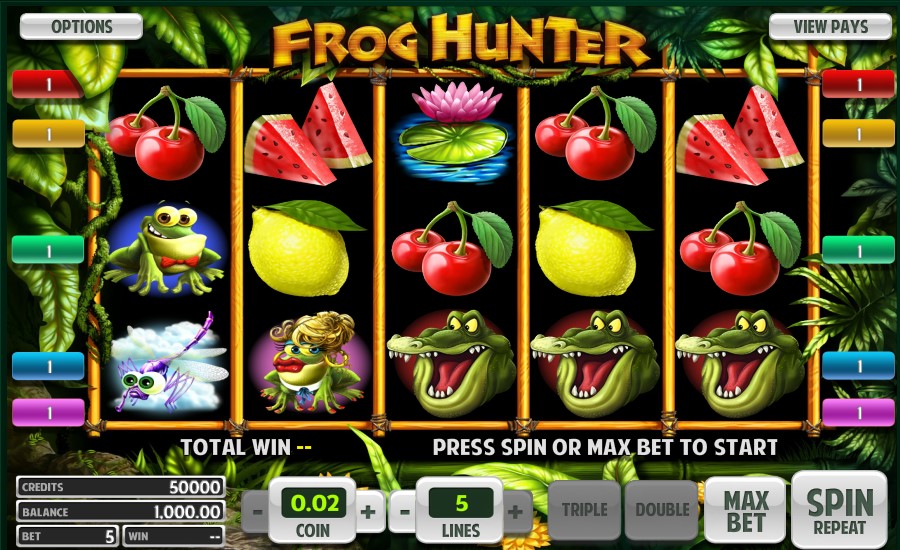 Frog Hunter is a both-ways-win video pokie released by Betsoft. It is not rich in features but it will attract your attention if offbeat slots are what you like. It is hard to imagine that frogs could ever become a theme for a pokie but Betsoft’s creative guys have once again proven they deserve the highest accolade for their boundless imagination and excellence in graphic designs. In engineering terms, the five-reel Frog Hunter slot has a surprisingly low number of paylines, just 5. But in all other aspects, this is a full-fledged modern pokie and this becomes apparent at a glimpse. There are two features such as a dragonfly bonus and a water lily bonus. The highest jackpot in the pokie is $2500.

The key distinction of the pokie from 99% of its peers is a both-ways-win model used in Frog Hunter and the system underpinning this feature actually multiplies the five factual paylines by x2, making it 10 in total. When playing slots based on this mathematical model, winning combos are counted from left to right (as is the case in most pokies) AND from right to left. Let us suppose you get four Lemons on reels 1 to 4 plus three Lemons on reels 3, 4 and 5. In many other pokies, only the first combination will be factored into payouts because it runs traditionally, from the first reel. Referring to Frog Hunter, both combos will bring you a win thanks to the Win Both Ways approach.

The pokie has fresh, neat and colorful visual representation with meticulously painted symbols. Whether we like it or not, the game is set at a lake that frogs and mosquitoes consider their home. The reel set is enlaced with lake flora that adds a realistic touch to the game. The symbols on the reels have a dual nature because some of them fail to belong to the natural theme. This relates to cherries, lemons, plums and slices of watermelon, all of which were borrowed from classic pokies.

The remaining symbols stick to the theme and include a pop-eyed dragonfly, a hungry alligator, a female frog with painted lips, and a male frog wearing a red bow tie. Payouts start from three of a kind and higher and they are somewhat uniform across the paytable. For example, each animal symbol awards 100 coins for five of a kind, differing only in how they pay for 3 and 4 of the same.

The pokie has only 5 paylines; three of them are arranged horizontally and two are V-shaped. This is a bit scarce by today’s standards but keep in mind that the pokie pays both ways. There are two options to adjust: a coin denomination ($0.01 and $5) and the number of active lines. You are entitled to play at a single line, if needed. Anyway, the minimum and maximum bets (with all lines enabled) are $0.10 and $25 per spin, accordingly.

When a dragonfly appears to the right of the male frog or to the left of the female frog, the dragonfly bonus starts. The frog will catch the dragonfly with his tongue and the on-reel bonus ends in a few moments after start. You just get your total bet doubled or tripled, which is equivalent to $75 at the maximum stake.

The male and female frogs create mixed combinations. This means that 3, 4 or 5 of any of these symbols arranged in a payline order award 25, 80 or 100 coins, regardless of their sequence on the payline. For example, you get 100 coins ($500 at max) when hitting two macho frogs + two lady frogs + one macho frogs on an active line.

When three or more water lilies occur on adjacent reels, you unlock a bonus feature. Your objective is to guide the frog across the lilies from one screen edge to another, and avoid an alligator who sneaks on the central reel. Each step represents a challenge for the frog and can end in failure if the alligator grabs him. The potential prize in the bonus depend on the number of triggering water lilies and the number of moves you have made successfully. In general, a bonus win ranges between x2 and x20 the total bet, per step, so the max reward is $2500 at max.

After a spin that has earned you a win, you have two gamble options. Clicking Double, you will see four identical symbols, for example, dragonflies. Two of them reveal a prize that is twice as high as the original win but the other two reveal nothing. Clicking Triple, you have the chance to multiply your latest win by x3 and this time you should pick 1 of 3 symbols and the chance to succeed is 1 to 3.

Frog Hunter is a 5-reel 5-payline pokie with a frog theme. There are two on-reel features including Water Lily and Dragonfly bonuses as well as an offbeat gamble feature that offers you to double or triple a win. Bet options are well suitable for low rollers.