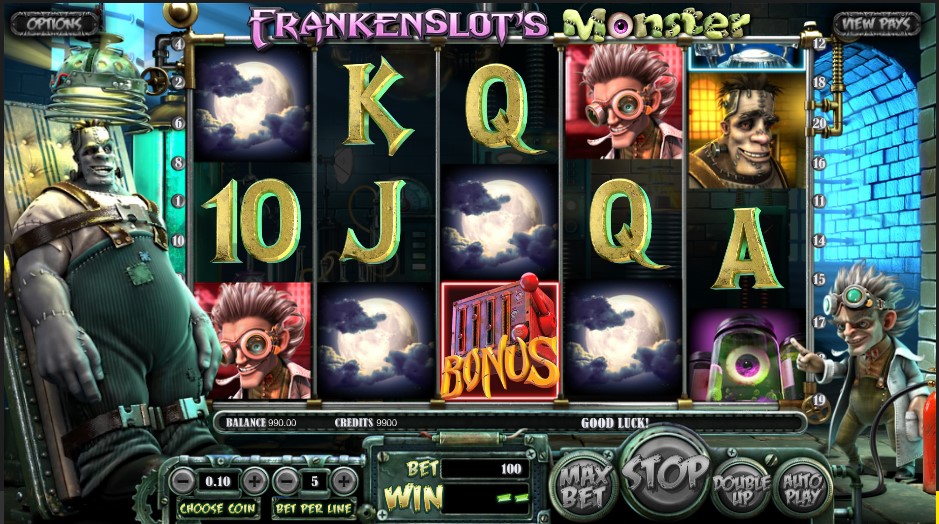 This thrilling and funny pokie is inspired by the classic story of Dr. Frankenstein and his blood-curdling experiments that gave birth to a weird humanoid monster. The visual imagery of the pokie is made as if smoothed down by censorship guys who removed all scenes of violence and left only inoffensive things. In terms of features, the slot has free spins, a wild symbol and an electrifying – in every sense of the word – bonus game. The first largest jackpot in Frankenslot’s Monster is $5000.

Taken as a whole, the slot marches in lockstep with Betsoft’s game library. Casting a glance at the pokie (if you did not know it’s Betsoft) you will easily recognize the developer’s signature style, distinctive design of constantly moving characters beside the reels, and even the expression on their faces. So if you have tried other 5-reel pokies from the world’s premier online pokie creator, you will take a liking to the reviewed game.

The reels configuration is standard with 5 reels and 3 rows, and the number of paylines (20) is well within Betsoft’s tradition. Behind the reels, there is a rich background that portrays a clandestine lab where a sinister Frankenslot with white disheveled hair makes dreadful experiments. On the left-hand side of the reels, a poor monster with patchwork skin and crazed look is seen tied to a vertically mounted cushion. Both the characters encourage you in every way to place a bet, and both are joyful when you get a win: the creature applauses, jumps up a little and nods his head. The pokie’s artwork is great, and you should not miss it out in your favorite online casino.

A bet size is customized from the minimum of $0.20 up to $100 by changing a coin denomination ($0.01 to $1) and the number of coins per line (1 to 5). Clicking on the Max Bet control, you order the pokie to place 5 coins of your selected denomination.

A power-generating device emitting bolts of lightning and light flashes is a wild symbol. Along with being a substitute for normal pictures, wilds boast of paying out the pokie’s largest jackpot of 5000 coins, which translates into a massive $5000 at the maximum bet. In base game wilds behave as described. In free spins, the role of wilds is more important because one to three of them emerge during each spin.

A big box with tubes, gauges and switches is used as a scatter and your guide to 8 free spins. To get into the feature, three of these symbols need to become visible in any position on reels 2, 3 and 4. Free spins differ from base game in two ways: first, they run automatically without your clicking on Spin, and second, they are more rewarding than base game thanks to wild symbols. At each spin, 1, 2 or 3 random symbols will turn into wilds before winning are evaluated. After the transformation, wins are determined and you get a payout. Earning 3 scatters during free spins will reactivate the feature.

If pokies were subject to the same rating systems as films, Frankenslot’s Monster would be labeled as R or even NC-17, according to the Motion Picture Association of America rating system. Fortunately, pokies are played by adults so you will hardly be shocked when watching this heart-racing feature. To trigger it, three Bonus symbols need to appear on the reels. You will then see a control panel with six knobs and switches.

By clicking or dragging & dropping the controls, you change the power of shock to send to the Monster. When you are satisfied with the selected current intensity, you pull the lever. The sparks fly all over the lab and the poor electrocuted monster shakes for a few seconds. The amount of bonus prize is determined randomly, going up to x20 the total bet ($2000 at max).

Betsoft use their famous coin toss gamble feature in which you are to guess correctly the outcome of a coin flip, Heads or Tails. The feature is accessible after any win in base game. The player can gamble the entire winning or just half of it by clicking Gamble All or Gamble 50%. A correct choice of head or tail will double your winnings.

Frankenslot’s Monster is a 5-reel 20-payline pokie loosely based on the Frankenstein story. Having excellent graphics and compelling animated pictures, the pokie offers 8 retriggerable free spins with 1-3 wilds, and a second-screen bonus. The maximum jackpot prize runs up to $5000.