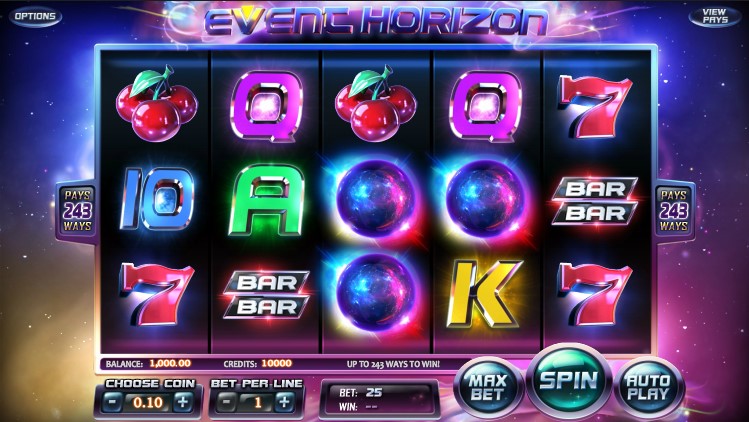 Event Horizon is a 5-reel pokie with a no-payline, 243 ways model. This time, Betsoft elected not to use their signature 3D effects and gorgeous graphics but give some rest to imagination of their fans. The reviewed pokie looks simple in design and features, and it is allegedly targeted at those who prefer playing three-reel slots, regardless of having five reels. The major feature that dominates the gameplay is Cloning Reels that enhance your winning chances and raise the bar of your winning expectations.

The title and graphic elements of the pokie deal with an astronomical term of the “event horizon”. This means an imaginary sphere around an extremely heavy space object (e.g., a black hole) through which a spaceship or small particles can pass only inward and cannot cross it outward. Betsoft developers allegedly imply that the pokie has a huge gravitational pull and once inside, the player will not be able to escape. Unbiasedly speaking, Betsoft could have done it better because half of the symbols are common playing card values.

The 3×5 reel set is placed in deep space. Behind it, there are flashes and threads of light emitted by a black hole. Symbols in the pokie are more appropriate for a three-reel solution but they are decorated with space motifs in mind. For example, 10, J, Q, K and A radiate multi-colored light as if they were stars. The remaining symbols are taken directly from classic pokies, and again, their design is perfect; in fact, the typical retro symbols such as BARs, were given a modernized look.

Non-feature payouts are moderate-sized, as compared with other pokies of the vendor. Playing card icons award up to 200 coins and they are on the low side of the paytable. The same refers to cherries, which have the same payout format as A’s (20, 75 and 200 coins for 3, 4 or 5 of a kind). The remaining symbols are more fruitful: single and double bars pay 1250 coins for five of a kind, triple bars award 2000 coins, bells will add 2500 to your bankroll and red sevens turn out to be the most profitable icons with the maximum prize of 5000 coins. In real money terms, the top three payouts are $1250, $625 and $500. Note that combos are determined in accordance with the 243-ways mechanics to be further explained below.

Bet sizes presented in Event Horizon are somewhat uncommon for the online casino games released by Betsoft. The minimum stake is $0.30; there is nothing unusual about it. But coin denominations come in a narrow range from a cent to $0.25. There is also nothing surprising about Bet Per Line values that are available from 1 to 5. The only strange thing is that the pokie has no paylines but the option is titled as “Bet Per Line”. With this in view, you can easily calculate that the maximum bet is $0.25 x 5 x 30 = $37.5.

When no paylines are present, some novices feel at a loss how payouts are resolved. With paylines, it is easy to track the wins formed after any given spin. But the undeniable advantage of the 243 Win Ways format is an increased number of combinations that can be potentially completed during a spin. This model is even simpler than you thought. When 3, 4 or 5 identical symbols stop on reels 1, 2, 3 and further to the right, you get cash as per the paytable. These symbols may occupy different positions on the reels because this is not a relevant factor; the crucial thing is that the set of symbols be on bordering reels.

What about stacked symbols? In most gaming situations, icons come in succession on the same reel. This phenomenon is known as a “stack”. When the mechanism of stacking is coupled with the 243 Win Ways system, the resulting mix is impressively efficient.

An artistic representation of a black hole is a wild symbol. In fact, the wild in Event Horizon is a weak symbol because it can only substitute for pictures and has no additional perks such a multiplying effect and all that. Further to its weakness: the wild is barred from landing on the first reel.

A few moments after you have clicked Spin, two or more reels may become cloned, meaning they will have the same identical pictures on them. The involved reels will be surrounded by light and other visual effects for you to differentiate them from the others. It may so happen that the bonus area expands on one or more neighboring reels to cover ultimately three, four or five columns. Synchronized reels increase win values by extending the length of a winning combination.

Event Horizon is a 5-reel pokie utilizing the 243 Win Ways approach. A bet size is adjusted between $0.30 and $37.5, and the top win is at 5000 coins. The slot has two features: a plain wild symbol and Cloned Reels, with the latter involving replication of reels. Event Horizon will appeal to 5-reel and 3-reel pokie fans because it has a set of retro symbols. One last thing, the slot lacks scatters, Betsoft’s traditional gamble feature and dedicated features playable in a new screen.