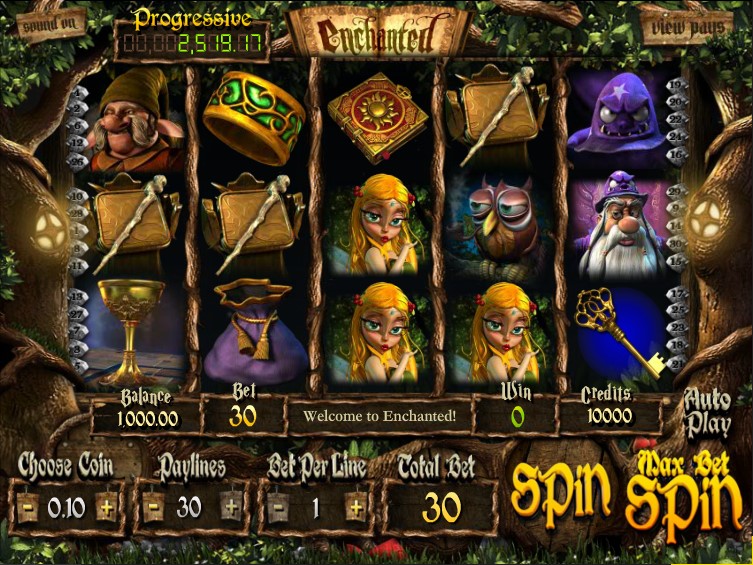 Enchanted is a 5-reel 30-payline video pokie equipped with a local progressive jackpot. Set against a magical forest inhabited by folklore creatures, the pokie tells you a story about a bumbling dwarf Tonk, a sticky-fingered ogre Rufus and other dwellers of the magic land. As most games from the industry leading company Betsoft, Enchanted has many bonus features such as Crazy Reels, free spins and Save Feera’s Birdie. Perhaps the most enticing element of the pokie is a progressive jackpot that grows higher pro rata to your bet size. The first largest non-progressive award in the pokie is $20,000.

While the game is loading, the intro video shows you briefly the key features and reveals the scenery in which the game’s action takes place. The reels are framed with thick tree roots that a dwarf sometimes uses to climb to top symbols and make some feature transformations to them. Around the reels, there are massive trunks crowned by lush leaves. Every symbol is drawn with every minute detail intricately designed, and whenever you get a payable combo, the symbols that make part of it come to live to show you a short computer animated film – it lasts for 1-2 seconds but it is a true masterpiece of digital art.

To better understand how big the payouts are, it is reasonable to characterize the bet sizes available in Enchanted. The number of lines is permanent, you always have 30 of them in play. A bet is adjusted by changing a coin value ($0.01 to $1) and the number of coins per line (1 to 5). With this, a bet per spin ranges between 30 cents and $150. Looking at the payouts again, one may conclude that the pokie is fairly generous because wagering $150, one has the chance of hitting $20,000 (or x133 times the total bet).

Each golden key stopped on the fifth reel adds to the key counter, and once you collect three of them, the Tonk’s Tinkering Doors feature will be triggered. It is exciting to watch a clumsy Tonk crawling up the reels to grab the golden key when it appears at the top row of symbols. Note that changing a bet size will remove all the keys collected so far. Now on to the bonus. Suddenly, a message pops up reading that the reels have been broken and that you should use the 3 keys to fix them. Six symbols will turn into locked doors and you are to pick any three of them. Tonk comes to your selected door, unlocks it with a key, takes a wrench and begins fixing. Each of the bonus doors reveals a random cash prize of around 700 to 1200 coins.

Two creepy purple hats with big teeth initiate the Crazy Reels feature designed with the same level of creativity as other features from Betsoft. A wreckhouse tornado will dash across the screen and nudge reels up or down, rearranging the current formation of symbols. The tornado whirls away and leaves many winning combinations behind.

These are not dull boring free spins but a spectacular and bonus-packed part of the game that is both eye-pleasing and profitable. Once three spellbooks are visible on reels 1, 3 and 5, the magic begins. You are awarded 300 coins instantly and get 10 free spins. If a unique Enchanted symbol stops at the center of reel 3, you can be granted 1 of 4 bonus extras determined randomly by a quick spin of a bonus wheel that shows four winning sectors, each for a pokie’s protagonist: Tonk, Rufus, Seera and Elrid. The creature picked by the pokie automatically from the wheel does magic and awards 1) 10 additional free spins, 2) a multiplier of x2 applied to all wins on the current spin, 3) instant cash, and 4) an expanding wild on the third reel.

Seera and Rufus do not like each other because the ogre has once stolen her cute birdie. If two of them appear next to each other on the reels, a bonus feature starts in which you are to attack Rufus to return the poor birdie to little elf Seera. Each attack brings you coins and the feature continues until the health of your opponent drops to zero. The ultimate prize varies greatly and depends on your total bet.

How to win the local progressive jackpot?

Betsoft integrated a progressive jackpot into the game and it grows when users of each specific online casino make real-money stakes on that game, so jackpot values may depend on the place you are playing the game at. There is an important requirement that a qualifying gamblers must comply to be eligible for a jackpot: each spin must be played with 5 coins of whatever value. With this, the minimum qualifying stake is $1.50 per spin. And another thing worthwhile mentioning: the jackpot amount changes proportionally to a bet size. A jackpot is hit when five Elrid symbols appear on an active payline.

Enchanted is a magic-themed 5-reel 30-payline pokie with a local progressive jackpot. Features include free spins with 4 bonus extras, a Crazy Reels bonus, a Golden Keys bonus and a second-screen feature. Surprisingly for Betsoft, the max non-progressive prize is $20,000, which is a wonderful alternative for a progressive win.