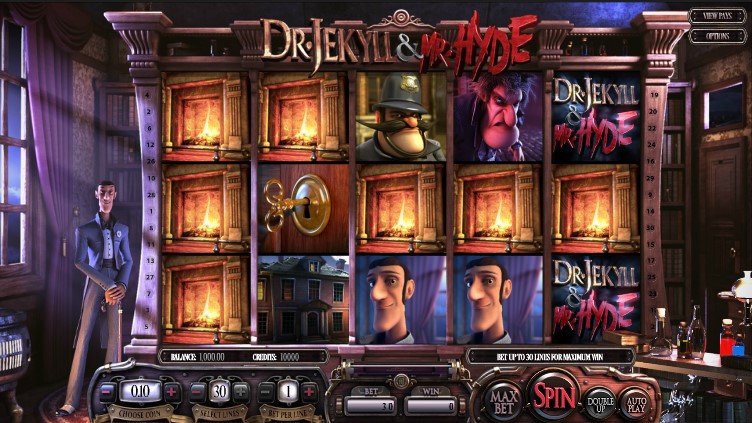 Betsoft has become shorthand for supreme-quality games with superbly drawn graphics, extraordinary animations and unbelievable bonus features. Their pokies are oftentimes based on famous films, books or cultural phenomena and the reviewed 5-reel 30-payline game is another quintessential example of a brilliant game that is a delight for the eye. Along with perfect visuals, the pokie has two wild symbols, free spins and two second-screen bonuses in which you act as Dr. Jekyll brewing a potion or his alter ego committing crimes. The maximum payout in base game is $1200 but bonus features and special symbols open up better winning prospects.

The pokie is designed in Betsoft’s branded cinematic style with mind-blowing three-dimensional graphics and an impressive cartoon-like manner. Dr. Jekyll, the main character, is shown standing near the reels and reacting to every win. When he gets tired of standing, he begins walking on the screen and comes up to the table scattered with flasks and chemical agents. The visual design of the slot is dark; the room (lab) where the action takes place is dim. With that, the gambler is plunged into the suspenseful atmosphere of the classic gothic story, which is masterfully written by Robert Louis Stevenson and is often referred to as one of the best depictions of the Victorian era.

A Betsoft pokie fan will find here a typical set of bet options. The first changeable option is a coin denomination available between a cent and a dollar. The second option is the number of coins per line, which is also Betsoft’s standard at 1 to 5. The number of lines is permanent at 30. That said, the minimum and maximum stakes in the pokie are $0.30 and $150.

The Dr. Jekyll & Mr. Hyde logo may seem a worthless symbol at first glance because it provides no payouts whatever. But actually it plays an important role in the game because it 1) substitutes for two high-paying symbols, Dr. Jekyll and Mr. Hyde, and 2) acts as a trigger for some bonuses described below.

Be all eyes to see a picture of a smiling Dr. Jekyll on the central reel and a red potion flask on reel 2 or 4. When this occurs, a chemical reaction begins. All symbols on the reels go crazy, they shuffle, rearrange and rush about the screen accompanied by explosion and sparkles of light. When the reaction is complete, you will see a new layout of symbols that are guaranteed to create at least one win. A Wild Hyde symbol can become visible as a result of these transformations, and this is the only game mode where this symbol manifests itself. The Wild Hyde substitutes for all symbols and pays out up to $1200 for five of a kind.

Requirements for triggering the bonus are essentially the same as above: Once you see Mr. Hyde on reel 3 and a blue potion on reel 2 or 4, the bonus starts. It is less eye-catching than the Dr. Jekyll related feature but is not less beneficial. You get a random award from x5 to x20 the total bet. That’s all.

During base game, you will see red potions landed in any position. They pay nothing but each potion adds to the meter. Once 10 potions are collected and the meter is full, the slot awards you a free spin bonus. The duration of free spins is variable and is determined by blue potions. The point is that a free spin feature has another meter, which is designed to indicate the level of Blue Potions. Whenever a blue potion lands during free spins, it adds to the meter and after collecting five of them, free spins end. To summarize: 10 Red Potions are required to trigger free spins, and 5 Blue Potions finish free spins.

If you have never seen a night London, it is high time that you entered the Frenzy Bonus. Actually, you will not find here skyscrapers and double-decker buses because the feature is set at the end of the 19th century. To activate the feature, you need to hit a Logo + Mr. Hyde + Logo combination on reels 2, 3 and 4. You are then taken back in time to London and see the scene from “behind Mr. Hyde’s back” perspective, much like in third-person shooters. The main protagonist is running and then he comes to a turn, at which point you are asked to pick a direction where to run, right or left. Depending on your choice, Mr. Hyde may rob a jewelry shop or do something else that would earn him money. Or he can bump into a policeman who would begin chasing Mr. Hyde and the feature ends. The max bonus prize you can end the bonus with is equivalent to x66 times the total bet (up to $9900).

When a Logo + Dr. Jekyll + Logo combo lands on reels 2, 3 and 4, you get the chance to help the doctor treat himself from that strange duality of mind by brewing an anti-monster serum. Your task is to pick ingredients and the faster you find the correct ones, the higher the bonus prize. The max award in the bonus game reaches $24,000.

This is another stunning 5-reel pokie released by Betsoft. The game has a free spin feature with a non-fixed number of spin, a video game-styled Frenzy bonus, Potions bonus and two on-reel features associated with potion symbols. The min/max bets are $0.30/$150, while the top prize is a hefty $24,000 up for grabs.